Rand Paul Tells Fox Viewers To Join Lawsuit Against NSA: ‘I’m Going To Challenge This At The Supreme Court’
video

Rand Paul Tells Fox Viewers To Join Lawsuit Against NSA: ‘I’m Going To Challenge This At The Supreme Court’ 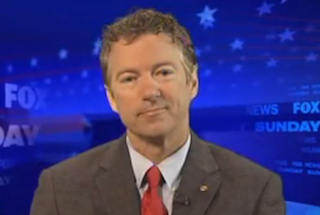 Kentucky Senator Rand Paul took to Fox News Sunday to declare his legal opposition to the NSA’s surveillance programs. “I’m going to be seeing if I can challenge this at the Supreme Court level,” Paul said.

“I’m going to be asking all the internet providers and all of the phone companies: ask your customers to join me in a class action lawsuit,” Paul told host Chris Wallace. “If we get ten million Americans saying we don’t want our phone records looked at, then maybe someone will wake up and something will change in Washington.”

Like many lawmakers, Paul drew a distinction between targeted surveillance and the blanket surveillance revealed this week.

“They are looking at a billion phone calls a day,” Paul said. “That doesn’t sound to me like a modest invasion of primary, it sounds like an extraordinary invasion of privacy.”

“I have no problem if you have probable cause, you target people who are terrorists, and you go after them,” Paul continued. “But we’re talking about trolling through billions of phone records…That is unconstitutional.”

Paul also said he would introduce the Fourth Amendment Restoriation Act, though he offered few details about the still-hypothetical legislation.

“If you talk to young people who use computers every day, they’re absolutely with me,” Paul said. “What I spend on my Visa each month, that’s my business, where I spend it, and whether I read conservative magazines, whether I subscribe to Fox News, or whether I subscribe to Yahoo or Google—what I do with my private life is my private life. If you suspect me of a crime, have probable cause.”

“So much of our life now is digitalized, that we have to protect it from a snooping government,” Paul said. “We’ve now got a government that appears to target people based on their political beliefs. I don’t want my phone records being given to an administration I can’t trust.”

Paul remembered that the public outrage against SOPA and PIPA legislation last year were somewhat successful in pushing back the laws, and predicted that if people reacted with similar severity to the current surveillance measures, they would be successful in repealing them.