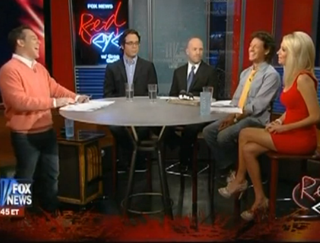 With the government considering seriously implementing federal anti-marijuana laws, considering a ban on buying guns for those who consume, many have been raising concern about the potential for abuse and expansion to other drugs that may be legal and potentially more dangerous to mix with arms. The Red Eye panel weighed in on a potential ban on selling weapons to people who have medical marijuana licenses or are known to consume the drug. It was a topic that brought out rare ire from Bill Schulz against President Obama for the federal government proposing it.

As host Greg Gutfeld explained, the reason the ban even came up to begin with was the fact that some “customers were using their medical marijuana cards as identification” in gun stores, which led the states to ask what to do about the dilemma. The idea of separating gun owners from their constitutionally protected right to own their weapons sounded like a “ridiculous, serious Second Amendment issue” to panelist Kayleigh McEnany, who thought it outrageous. Panelist Jason Counter agreed: “I think we should get drunk and shoot things like the Founding Fathers intended.” The comment made Gutfeld note that it is true that “drunks are more likely to shoot people, drunks are generally more likely to be violent… potheads generally forget they even have a gun.”

There seemed to be unanimity on this issue across the board, as John DeVore used it as a launchpad for his presidential campaign: “I want an American where two men can brunch and oil their AR-15s baked.” Replied Schulz, “I would like to run your campaign.” He further noted that he found this yet another example of President Obama being far more conservative that he promied to be, and breaking an “unspoken deal” between him and his voters. “I’m not usually angry at Obama, but I’m angry, ” he concluded.

The panel then watched a short clip of Bill Schulz wearing lederhosen.