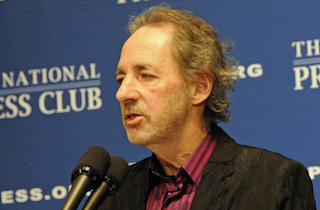 On the off chance you still enjoy the dessicated husk of what was once the greatest show in the history of the medium, happy day! Harry Shearer, the voice of dozens of beloved Simpsons characters, is returning to the show.

Two months ago, Shearer announced he was leaving the show after twenty-six seasons over a contract dispute; he maintained it was not about money, which is exactly what everybody says when it’s about money.

Producers swore the show would continue without him, though fans wondered how that was possible given how many recurring characters he voiced, including Ned Flanders, Mr. Burns, Waylon Smithers, Seymour Skinner, Bill Clinton, and more.

On Tuesday, Entertainment Weekly reported Shearer had reached a new deal in which he will earn more than $300,000 per episode for the next two seasons, the same rate as the top-billed voice actors.

It was apparently a close call:

In order for the Simpsons producers to remain on schedule, they commenced production on season 27 without him. (In any case, they already had seven holdover episodes from last season in the can, and those include Shearer’s voices.) Jean told EW last month that if Shearer did not change his mind and return, his impressive roster of characters—which also include Seymour Skinner, Lenny, Dr. Hibbert, Kent Brockman, Reverend Lovejoy and Otto—would not be retired; new cast members would be hired to continue voicing those roles. Shearer’s deal was completed in enough time to avoid that scenario, and his temporary absence behind the scenes will not be significantly felt on the new season.

UPDATE: This was inevitable:

It appears Harry Shearer was so horrified by my Simpsons impressions he agreed to return: http://t.co/z2CEFLvPQs pic.twitter.com/vHToDfHCXM

Below is a non-exhaustive list of characters Shearer voiced, via the Simpsons Wiki: