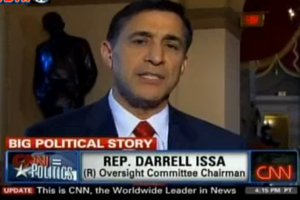 Newly-appointed Chairman of the Reform and Oversight Committee Darrell Issa has been causing commotion about using his subpoena power to investigate corruption in the White House, calling the Obama administration “one of the most corrupt administrations in history” and promising a deluge of investigations. Challenged on the use of the word “corruption” by CNN’s John King, the Congressman went after the entire network and, namely, their understanding of the word.

King brought up Rep. Issa’s previous comments almost immediately at the start of the interview, asking whether, given that he has not yet had the opportunity to investigate as chairman, he owed the Obama administration an apology for calling them corrupt. Rep. Issa replied that it was not just the administration, but the previous Congresses which had “handed out huge amounts of money for this administration that were misused,” and that “I’ve always said that Congress is more to blame.”

King then asked his question more directly a second time: “Was it wrong to use the word corrupt?” Issa didn’t give a yes or no, but defined “corrupt” so as to clarify his statement, lashing out at CNN in the process:

“I think people misunderstand the meaning of the word corrupt, and obviously CNN does. ‘Corrupt’ or ‘corrupted’ or ‘failure’– it’s no different than a disk drive thats giving you some bits that are wrong. I’ve never said it’s illegal, I’ve never made any of the statements that are often said on CNN that imply wrongdoing of the president on a criminal level.”

The conversation continued with more detail into what Issa was preparing to investigate, going as far back as the beginning of the Bush administration, but King added an epilogue to the interview afterwards live on the program: “don’t worry about” the fact that Issa attacked CNN in the interview– “the chairman was smartly retreating… but doesn’t want to say so.”