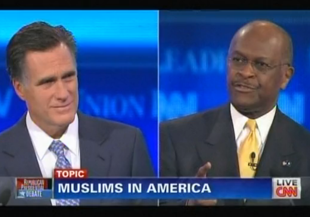 Halfway into the CNN Republican debate, the hopefuls went through a venerable minefield of controversial topics, like the economy, foreign policy, social issues, and late night comedians. But some questions were also narrowly tailored to specific candidates and comments they have made in public, and Herman Cain could not escape answering whether he would establish a “loyalty test” for Muslims in his employ. This gave the candidates a chance to stand staunchly against Sharia Law overruling the Constitution.

Cain clarified that his comment that he would give Muslims loyalty tests did not mean “litmus tests,” and that he was not talking about all Muslims. “We have peaceful Muslims, and then you have militant Muslims,” he explained, “I was thinking about the ones that are trying to kill us.” Then he clarified that, despite “certain instances in New Jersey,” he did not “believe in Sharia Law in American courts.” “I believe in American law in American courts, period,” he declared.

The next candidate to get his shot at the question, Mitt Romney, answered somewhat more leniently to the question, while reiterating that he had no intention of permitting anything but the Constitution to be used as a legal compass, and certainly not the Koran. Newt Gingrich, meanwhile, doubled down on Cain’s declaration, adding that he would certainly not permit disloyal Muslims to work in his administration. “We did this in dealing with the Nazis and in dealing with the communists,” he explained, and he would not be afraid of doing the same to Muslims.