Ricin-Laced Letter Suspect Speaks Out After Charges Against Him Are Dropped: ‘I Thought They Said Rice’
VIDEO

Ricin-Laced Letter Suspect Speaks Out After Charges Against Him Are Dropped: ‘I Thought They Said Rice’ 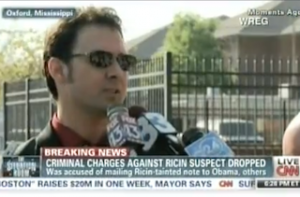 Just six days after authorities announced they had arrested Paul Kevin Curtis for allegedly sending ricin-tainted letters to President Obama and Sen. Roger Wicker (R-MS), those charges have been dropped. During a local press conference in Oxford, Mississippi, part of which was picked up by CNN, Curtis said he was ready to “get back to normal.”

Curtis was released from detention earlier in the day Tuesday and his lawyer indicated that he had been framed. The former suspect, who has worked as an Elvis impersonator, described what it has been like “the last seven days, staring at four gray walls, not really knowing what’s happening.”

“When you’ve been charged with something,” Curtis told the press, “and you never heard of ricin, or whatever. I thought they said rice. I said, ‘I don’t even eat rice.’ It’s a learning experience for me, and for my family.”

On a more serious note, Curtis thanked his “family, friends and fans” for their “love and support,” along with “Jesus Christ, who has been and will always be my best friend, my bodyguard, my teacher and almighty judge.” Curtis also called Sen. Wicker a “good and honest man,” said he “respects President Obama.” He added, “I love my country, and would never do anything to pose a threat to him or any other U.S. official.”

CNN White House correspondent Dan Lothian told Wolf Blitzer that the FBI’s “ongoing investigation” into the ricin mailings has revealed “new information,” indicating that they could have another, undisclosed suspect in their sights.