Roland Martin Clashes With CNN Panelist: ‘Florida Tried To Suppress The Vote And It Backfired’ 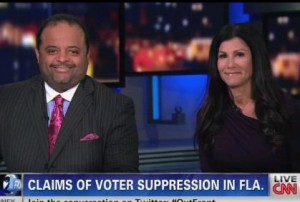 For two years I’ve been blasting these efforts in Florida as outright voter suppression, and it is no shock that you’re actually hearing this,” Martin said. “In a country where you want more people voting, why would you take away a day when people would say, ‘Hey no need for me to go the polls Tuesday, I can actually vote on that particular Sunday.’ Many of us believe they were targeting those churches that were voting in mass as well.

“These allegations that came up that we suppressed votes are coming from an ex-Governor who was a Republican, switched over Independent, is going to run as a Democrat against Rick Scott,” Nikpour said.

Next she turned her ire against Greer:

“And you’ve got a guy that’s a convicted felon stealing money that’s basically going to say anything. There was nobody that sat in any meeting and said ‘We’re trying to suppress minorities and blacks from voting.’ They did this to save money, for the states, for Florida.”

Martin wasn’t buying the excuse, pointing out that Florida’s constant changing rationales for restricting voting days made no sense whatsoever.

The segment continued with Nikpour bringing out the old favorite Republican boogieman, ACORN, and once again defending Florida’s actions as saving money.

Democrat or Republican, common sense would ask why Republican governors like Rick Scott conveniently waited to take action on restricting voting days and hours until the year of a crucial election rather than years before. The fact is, smart Republican operatives knew their party was fighting a huge demographic shift in favor of Democrats long before the election results made that painstakingly clear. Roland Martin has it right–it simply backfired.

Efforts to take away minority votes actually enraged and emboldened them to come out even more. This became crucial, not only for President Obama, but for American democracy.

The segment courtesy of CNN: