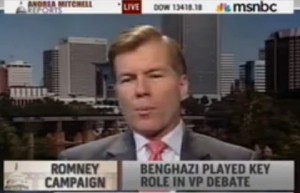 Mitt Romney campaign surrogate and Virginia Governor Bob McDonnell sounded a sensible note on Monday afternoon’s Andrea Mitchell Reports when he told host Andrea Mitchell that he agrees with family members of those slain in the 9/11/2012 attack on the U.S. consulate in Benghazi, Libya, that those tragic deaths should not be exploited for political purposes. “Listen, I’m a veteran,” Gov. McDonnell said, “and I fully agree. Americans ought to bind together, when we’re attacked, we ought to join arms, Republican and Democrat.”

While other Republicans pursue the notion of an Obama administration “cover-up,” Republican presidential candidate Mitt Romney has been exploiting the consulate attack since before the fires were put out, and even conflated the bravery displayed by slain former Navy SEAL Glen Doherty with Romney’s own quest to “take back this country,” prompting Doherty’s mother to denounce the use of her son’s death for political purposes.  The father of the late Ambassador Chris Stevens has also weighed in, saying “It would really be abhorrent to make this into a campaign issue.”

MSNBC’s Andrea Mitchell asked Virginia Gov. Bob McDonnell to respond to those calls, by family members, not to make this attack a campaign issue. “Let me just ask you quickly about the mother of Glen Doherty, the former SEAL who was killed, and the father of ambassador Stevens, speaking to Bloomberg News, and both saying please do not politicize the deaths of our sons.’ Do you think that it should be off limit for the campaigns?” Mitchell asked.

“Listen, I’m a veteran,” McDonnell replied, “and I fully agree. Americans ought to bind together, when we’re attacked, we ought to join arms, Republican and Democrat. That’s been the American tradition for a long time. And we should get the facts from the FBI and the commission, as I mentioned.”

He went on to say that the “broader role of America’s position of strength in the world as a foreign policy issue, our unequivocal support for Israel, what are we doing now to react to a dead ambassador” are legitimate issues for a presidential campaign, “but don’t demonize anybody right now regarding the specifics of this attack, because we don’t have all the answers yet. I agree with the parents. I think that’s right.”

McDonnell served in the U.S. Army as a medical supply officer from 1976-1981, in Germany and Virginia, then as a reservist until 1997.