Sarah Palin: If Tea Party Were Terrorists, Obama Would Pal Around With Us 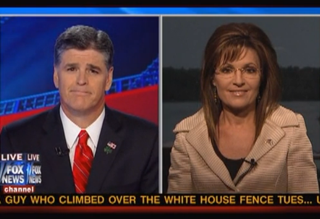 After a lukewarm segment last night, Sarah Palin returned to Hannity tonight to defend the Tea Party from criticisms comparing them to terrorists. The topic put Palin squarely back in her element, and she took the opportunity to slam President Obama for not being more vocal in opposing the hyperbolic rhetoric. Arguing that the administration had been far too lenient on actual terrorists to permit such language, she quipped, “if we were real domestic terrorists, I don’t think President Obama would have a problem with us.”

Palin noted that the casual labeling of Tea Partiers as “racist” during the debt debate proved that the speech the President gave after the Tucson shootings imploring political leaders to watch their language was “all talk”– a speech that host Sean Hannity noted Palin was particularly sensitive to since her crosshairs ad featuring Rep. Gabrielle Giffords shot a significant amount of outcry her way. “He wasn’t sincere in that,” she argued, “and that is typical Barack Obama… it’s blah blah blah. Otherwise,” she continued, “he’d be on Biden… to tone it down a bit.”

Palin then argued that the President’s record with terrorists didn’t give him much room to criticize others. “If we were really domestic terrorists, President Obama would want to be palling around with us.” She cited his relationship to Bill Ayers, “shaking hands with [Hugo] Chavez, wanting to read U.S. Miranda rights to alleged suspected foreign terrorists,” as evidence that he doesn’t mind terrorists all that much– “if we were real domestic terrorists, I don’t think President Obama would have a problem with us.”

She then railed against the administration and the media for the hyperbole that included a very well-placed Britney Spears reference: “Let’s call them out on their hypocrisy, Sean,” she advised, “because enough is enough. I’m not going to sit around with a sticker plastered on my forehead that says ‘hit me, baby, one more time.'”