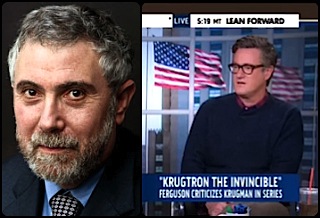 There were some seriously harsh words spoken about New York Times columnist Paul Krugman on Thursday’s edition of Morning Joe. It began with an extended takedown by Harvard historian Niall Ferguson, who has spent the last few days taking Krugman to task on The Huffington Post. By the end of the segment, Joe Scarborough had revealed that an unnamed public editor of the paper told him that Krugman’s column is their “biggest nightmare.”

The gist of Ferguson’s criticism was that Krugman claims to be a moral authority on economic issues like the current shutdown and coming debt ceiling deadline, but has not proven himself reliable in the past. “If you look at his journalism, I’m a historian,” Ferguson said, “the documents show he completely failed to anticipate the nature of the financial crisis.”

Ferguson accused Krugman of making a “180 degree” change in his position on the debt from “ten years ago when he was warning of fiscal train wreck.” And he also blasted the columnist for proposing a stimulus “three times of the size of the one we did in 2009” without any “downside risk to the credit-worthiness of the United States,” a claim he said was not “plausible” because it’s not “testable.”

“I’m here to tell him,” Ferguson concluded, “in public exchange, in public discussion there needs be humility, honesty and civility. That’s all. That’s what he lacks. There’s no accountability. Nobody edits that blog in The New York Times and it’s time somebody call him out. People are afraid of him.”

Once Ferguson was finished, Scarborough made his revelation. “I actually won’t tell you which public editor it was, but one of the public editors of the The New York Times told me off the record after my debate that their biggest nightmare is his column every week.”

The current public editor of the Times, Margaret Sullivan, assured her followers on Twitter that she is not the one who spoke ill of Krugman to Scarborough. She invited people to speculate about which of her four predecessors it may have been.