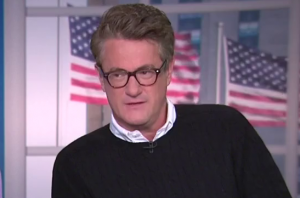 “I had multiple sources telling me last night that an independent with a the backing of a lot of Republican money is going to launch today.”

Scarborough asked his panel if anyone else had heard those reports (they had not). “I could be wrong… but several good sources told me that people– Republicans from let’s just say Never-Trump-land– found somebody and they’re going to put good money behind him.”

“This is French 2.0,” Scarborough said, alluding to National Review writer David French, who was briefly floated as a candidate. “I think it will be in that realm. But, somebody– somebody French-like,” he claimed.

“You can get on ballots for up to 300 electoral votes,” he noted. “You can bring lawsuits in the other places. I think at this point, the people that are talk about funding this are more interested in Trump losing than electing their candidate.”

The candidate revealed by sources has an impressive resume and the backing of key $$ contributors in the Republican Party.

Though he is connected with Republican politics, sources are saying the potential candidate has never held elective office.