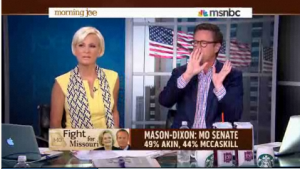 Congressman and Senate candidate Todd Akin‘s comments about “legitimate rape” were on everyone’s mind during Monday’s Morning Joe, prompting host Joe Scarborough to share that moderate Republicans that re bid spenders “have always driven me crazy.”

RELATED: GOP Senate Nominee: Victims Of ‘Legitimate Rape’ Do Not Get Pregnant

Guest Bob Herbert added that “the danger for the Republican party is this: Conservatism is fine. No problem at all. This country is a moderate to conservative country; I wish it was more liberal. But the problem are these extremists on the right or the wackos on the right. And then you were talking at the top of the show about brand, and the Republican party is in danger of losing its brand.”

Scarborough felt that some might dismiss Hubert’s comments because he is a liberal, but said one only had to look at poll numbers to know that he’s correct.

The panel then discussed how Akin’s comments puts Ryan in the hot seat as the two co-sponsored a bill that attempted to create a definition on what would constitute “forcible rape.”
Have a look, courtesy of MSNBC: