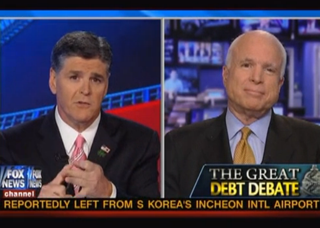 Sen. John McCain ruffled America’s already disheveled political feathers today with a Senate floor rant mocking the Tea Party’s position on the debt ceiling debate comparing them to hobbits and disparaging them for turning Sharron Angle and Christine O’Donnell into Republican nominees. Unsurprisingly, Sean Hannity had a bone to pick with the senator tonight on those comments, and on his opinion that the Republicans will get the blame for a debt default if they do not compromise.

Hannity came out swinging at Sen. McCain, wondering why the senator had turned on the Tea Party– “why not attack the President?” Sen. McCain corrected that he did intend to attack the Tea Party but that he disagreed with their obstinacy, especially if it would mean a plan like that of Sen. Harry Reid‘s– “one of the most flimsy, transparent, phony spending cut things, proposals, that I’ve ever seen”– being put into law. The alternative to Hannity, however, was Republicans “competing with themselves, which infuriates me a little bit.” He noted that the Rep. Paul Ryan plan in the House was a good start, and that “the House Republicans voted to repeal Obamacare,” all things it frustrated him not to see in the Senate.

“What I was trying to point out,” Sen. McCain explained, “as the Wall Street Journal was, that we need to act with our own spending cuts, with our own legitimate spending cuts, then all the pressure will be on the President and the Democrats and Harry Reid.” But Hannity continued to argue against the infighting– “I think Republicans in the House and Senate need to regroup, lock themselves in a room, and get behind one plan.” Sen. McCain disagreed strongly with this, as he argued that the Republicans opposing Rep. John Boehner‘s plan were demanding too much. “To somehow think that we don’t need to pay 40% of our bills is just wrong,” he argued. “I saw this movie in 1995… they [Republicans] won’t get to prioritize what doesn’t get paid.” Telling Hannity he was proud of his record, Rep. McCain concluded that “to shut down the government and take the blame for it is not something I want to do… I think the Boehner plan is a viable option; you clearly disagree.”

The major rift between them during the debate was not the Boehner plan, however, but the fact that Hannity did not believe Americans would blame the Republicans for a debt default, supporting the Rep. Connie Mack plan: “the country is going to burn and opportunity is going out the window and we’re saying we can’t but 1% a year for six years?”

While Hannity and Sen. McCain ended up not finding common group on the compromise front, Sen. McCain did address the Tea Party, not apologizing, but thanking them: “I admire, respect and appreciate the Tea Party, and they’re the ones that gave us a majority in the House of Representatives so that we can get something done.”