Sen. Feinstein: ‘State Dept Has to Come to Grips’ with Fact That Benghazi Deaths Were Preventable 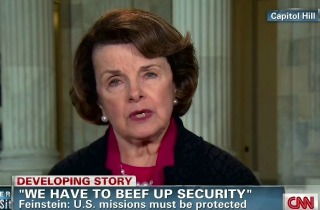 Senate Intelligence Committee Chair Dianne Feinstein (D-CA) appeared on CNN on Wednesday night to discuss her committee’s release of the findings of an investigation into the deadly 2012 attack on an American consulate in Benghazi. While she defended former Secretary of State Hillary Clinton from Republicans’ criticisms, she scolded the State Department, the New York Times, and others for drawing erroneous conclusions about the state of affairs in eastern Libya leading up to and following the attack.

Feinstein began by saying that there was “adequate intelligence” which “forewarned” of the potential for a deadly attack on the consulate in Benghazi. “We know there were concerns about Benghazi,” she continued. “We know there were training camps around that area, and it is something that I think the state department has to really come to grips with and see that we have 285 missions and embassies that, in fact, they are secure.”

Asked to respond to Sen. Marco Rubio (R-FL) who used the report to criticize Clinton for her “failure to provide adequate security,” Feinstein said that there was “no evidence” that Clinton was aware of the security challenges in Libya.

“For the future, we now know that we have to beef up security,” she said. She recommended that the recommendations of her committee’s report, which recommend increased security for diplomatic outposts and military contingency operations in place to respond to ongoing attacks, be implemented.

CNN anchor Wolf Blitzer asked Feinstein about a New York Times report which found that Al Qaeda was not involved in that attack. Feinstein said that the perpetrators were “loosely” affiliated with the global Al Qaeda network.

“There was no demonstration,” she asserted. “This was an attack, maybe not well organized, but probably 60 or so people.”

Feinstein concluded that the “warning signs” were plainly apparent that the Benghazi facility was not secure .“Perhaps, our ambassador should not have been there,” she concluded.