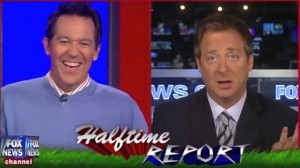 On Fox News’ Red Eye, host Greg Gutfeld led a discussion on the much-talked about debate between Chris Wallace and Jon Stewart regarding media bias. Although Gutfeld began with his own critical view of Stewart and unsurprising defense of Fox, many on the panel actually applauded Stewart and even agreed with him that hosting The Daily Show is much harder than Wallace’s job.

Gutfeld dismissed the idea that Stewart’s job was hard saying “the first and only step of The Daily Show is making jokes about people the writers disagree with.” Gutfeld also wondered “when he whines about FNC, isn’t it like he’s saying why can’t they be like everybody else?” GOProud Board Chairman Chris Barron agreed and thought Stewart’s whole performance with Wallace demonstrated “the height of smarminess.” Yet others on the panel, like Imogen Lloyd Webber, didn’t think Stewart was whining at all, and argued Stewart deserved a lot of credit. Bill Schulz especially went to bat for Stewart, concluding “smarmy is one word, I’d say brave. He came into the lion’s den and he defended himself.”

This entertaining debate seemed to be another example that disproves Stewart’s overarching critique of Fox News as merely being an organization that pushes one ideological agenda. In one moment you get Gutfeld declaring about Stewart “he’s unaware of his liberalism because he’s soaking in it” and “those who deny their own ideology most are probably lying.” Yet in the next minute, you get Schulz responding that Stewart is right and should be respected since “he can do Chris Wallace’s job, Chris Wallace can’t do his.”

Stewart may continue to laugh at Fox News’ “fair and balanced” slogan and believe it’s nothing more than deceptive marketing, yet as Fox anchors repeatedly give Stewart and others airtime to criticize their network and then continue to debate the merits of such claims, it demonstrates that if any “marching orders” come from the top (as suggested by Stewart), then one such directive is likely to constantly feature as many diverse opinions as possible.