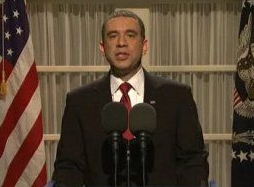 Disclosure: I didn’t see last night’s SNL. I’m in Canada with my parents (happy Canadian Thanksgiving, Canucks out there!) and Hulu does not work here. However, I do have Twitter which caught me up nicely: SNL sucks, no it doesn’t, yes it does, it’s funny, no it’s not, it’s boring, no it’s not, Gilly is back yay, Gilly is back yuck.

That’s why here at Mediaite, we bring you all the videos from last night’s show and let you decide for yourselves. Drew Barrymore was the host, Regina Spektor was the musical guest, and Obama was once again the target, this time for his lucky, lucky win of the Nobel Peace Prize. Per Fred Armisen as BHO:

“This prize bestowed by the Nobel committee in Norway is given annually to individuals who have made significant contributions to world peace. Jimmy Carter won it for decades of trying to find solutions to international conflicts, Al Gore won it for his years of education [the] U.S. about climate change, and us? Well, I won it for not being George Bush.”

SNL then expanded on the theme with a joke that, as RedEye’s Andy Levy pointed out, had already made the rounds on Twitter:

“The funny thing is it’s the first Powerball ticket I’ve ever bought. I was driving Sasha and Malia home from school and we stopped at a 7/11 for sodas. We all chose two numbers and there you have it: $70 million.”