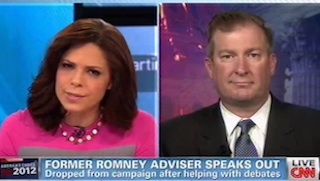 On Tuesday’s Starting Point, Soledad O’Brien confronted former Mitt Romney advisor Brett O’Donnell over his recent dismissal from the campaign, despite being credited for helping the former Massachusetts governor get his mojo back during debates. Politico’s Jonathan Martin had reported “internal tensions over staff receiving too much credit for the candidate’s comeback.”

“I’m not really going to talk about what happened either behind the scenes,” O’Donnell replied, “or what we do,” before explaining that while the candidate has a series of advisors, it’s ultimately the candidate himself who has to debate and make speeches. O’Donnell did, however, call Romney a “great candidate.”

“Hmm,” O’Brien responded. “I find it so interesting when people say, ‘I’m not really going to talk about that,’ but I guess people can read through the lines, into the lines, whatever they want.”

She then presented O’Donnell with new polling that shows Mitt Romney facing an uphill battle against Rick Santorum nationally and in the state of Michigan, and asked what he would do to help his former advisee, who she said isn’t looking like the “great candidate” he said he was.

O’Donnell said that Romney is going to have to continue getting his message out to voters and, despite victories in Maine and at CPAC, was wary that, “in this race, almost nothing has carried over for very long.”

“That might be the understatement of this political season, that nothing has carried over. We could graph it out.” O’Brien said, drawing an invisible line across the screen with a series of peaks and valleys. “It’s been something like that!”