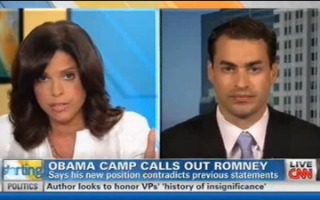 On Thursday, Starting Point host Soledad O’Brien pressed Barack Obama re-election campaign press secretary Ben Labolt to answer whether ObamaCare constitutes “a penalty — as his spokesperson told me the other day — or does he think it’s a tax as the Supreme Court has now said?”

Labolt replied that the Obama campaign has been “consistent” in its message that it’s a penalty, as well as “the largest health care tax cut in history.”

“What hasn’t gotten a lot of attention,” he continued, “is Mitt Romney not only disagreed with his campaign advisers yesterday, but disagreed with himself. As recently as 2009 he referred to his plan… the mandate…”

When Labolt reiterated that the President believes it is a penalty, not a tax, O’Brien followed with the inevitable question of whether this means that he is essentially disagreeing with the Supreme Court. Labolt responded that the mandate is “under the section of the law that is the tax code, but it said very specifically it’s a penalty.”

Later, after Labolt attempted to draw distinctions between Obama’s campaign and Romey’s, panelist Ryan Lizza brought the discussion back to the Supreme Court ruling by asking “how can you sit there and say you guys didn’t go before the Supreme court and make that argument?” when Chief Justice Roberts had “pressed your Solicitor General, or the Obama Solicitor General, on this issue,” and he had said that “this is administered by the IRS” and “talked about how it was under the tax code.”

“Review the court script,” Labolt replied. “The court transcripts, Ryan. At no point did any of the government lawyers say that it was a tax.”

“Nowhere during the arguments,” Labolt repeated. “We are the ones who have been consistent here. Consistent it’s a penalty. Mitt Romney has disagreed with his own campaign advisers and disagreed with himself about whether his own mandate is a tax.”