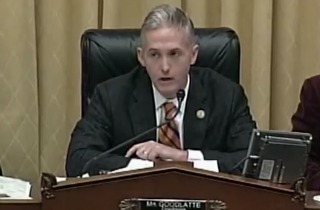 During a hearing into the constitutionality of voter identification laws enacted across the country, Rep. Trey Gowdy (R-SC) tore into claims by the Department of Justice that those laws were racially discriminatory. In the space of five minutes, Gowdy knocked down the claims, one by one, that a voter ID law passed in South Carolina in 2011 discriminated against African-Americans or was dissimilar to laws the Justice Department had cleared in a variety of other states.

Gowdy began by noting that, when the Palmetto State’s voter identification law was passed, a third of the state’s congressional delegation were African-American; former GOP Rep. Tim Scott and Democratic Rep. James Clyburn.

He went on to say that Scott is now one of two African-American U.S. senators and the state’s governor is also of minority descent.

“Further to same, South Carolina’s voter ID law was similar if not less restrictive than those DOJ had pre-cleared in New Hampshire, Virginia, and Georgia,” Gowdy continued. “And, moreover, South Carolina’s plan was similar, if not less restrictive, to plans approved outside of DOJ pre-clearance in states like Tennessee, Kansas, Indiana – which, incidentally, was affirmed by the United States Supreme Court – Idaho, South Dakota, and Michigan.”

He went on to say that the law passed in South Carolina made it easier for individuals to acquire a photo ID and to cast provisional ballots.

Gowdy turned to the professor who was testifying before the committee on the discriminatory nature of voter identification laws. “There was a 1.6 percent difference in African-Americans who had accepted photo IDs – acceptable photo IDs – and white South Carolinians,” Gowdy said. “20 years ago, when I was working on voting rights cases, that was considered de minimis.”

“Now, it costs South Carolina $3.5 million to defend that 1.6 percent difference,” Gowdy said of a legal challenge to that law which the state eventually won. He added that those who did not have identification cannot enter a federal court house, board an aircraft, or enter the chambers of Congress – all of those activities require photo identification.

“I’m sorry for the Department of Justice that they put politics ahead of the law,” Gowdy concluded.

Watch the hearing below: