Stephanopoulos Challenges Clinton Cash Author: ‘Is There a Smoking Gun?’ 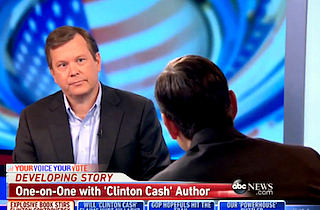 Clinton Cash author Peter Schweizer appeared on This Week and faced a very skeptical George Stephanopoulos, who argued that his accusations that Hillary Clinton exchanged favorable treatment from the U.S. State Department for multimillion dollar donations to the Clinton Foundation were unsubstantiated.

The most significant of the allegations center on a Russian company that was approved by the State Department to purchase a Canadian uranium company, giving Russia a sizable stake in the world’s uranium market, after a $2.3 million donation to the Clinton Foundation. But Stephanopoulos pointed out that the State Department was one of nine agencies that signed off on the deal, and that “there’s no evidence at all that Hillary Clinton got directly involved at all in this decision.” (A smiliar argument was made by Clinton surrogate Lanny Davis over on Fox News Sunday.)

“There were nine different agencies who approved it,” Stephanopoulos said. “Doesn’t that suggest that that was because there was no national security concern, not because of some nefarious influence by Hillary Clinton?”

“We don’t have direct evidence,” Schweizer said. “But it warrants further investigation because, again, this is part of the broader pattern. You either have to come to the conclusion that these are all coincidences, or something else is afoot.”

RELATED: Fox’s Faulkner: If Clintons Want to Bring Up Reporters’ Pasts, What About Stephanopoulos?

Schweizer compared his investigation into Clinton’s alleged quid quo pro to insider trading, in which investigators look for patterns of access and favors.

“We’ve done investigative work here at ABC News, found no proof of any kind of direct action,” Stephanopoulos said. “And an independent government ethics expert, Bill Allison of the Sunline Foundation (ph), wrote this: ‘There’s no smoking gun, no evidence that she changed the policy based on donations to the foundation.’ Is there a smoking gun?”

“Yes,” Schweizer said. “The smoking gun is in the pattern of behavior.”

Schweizer added that several of the donations were in breach of an agreement with the White House. Stephanopoulos conceded that point. “That is an issue for them, but it’s nothing that would warrant a criminal investigation,” he said.