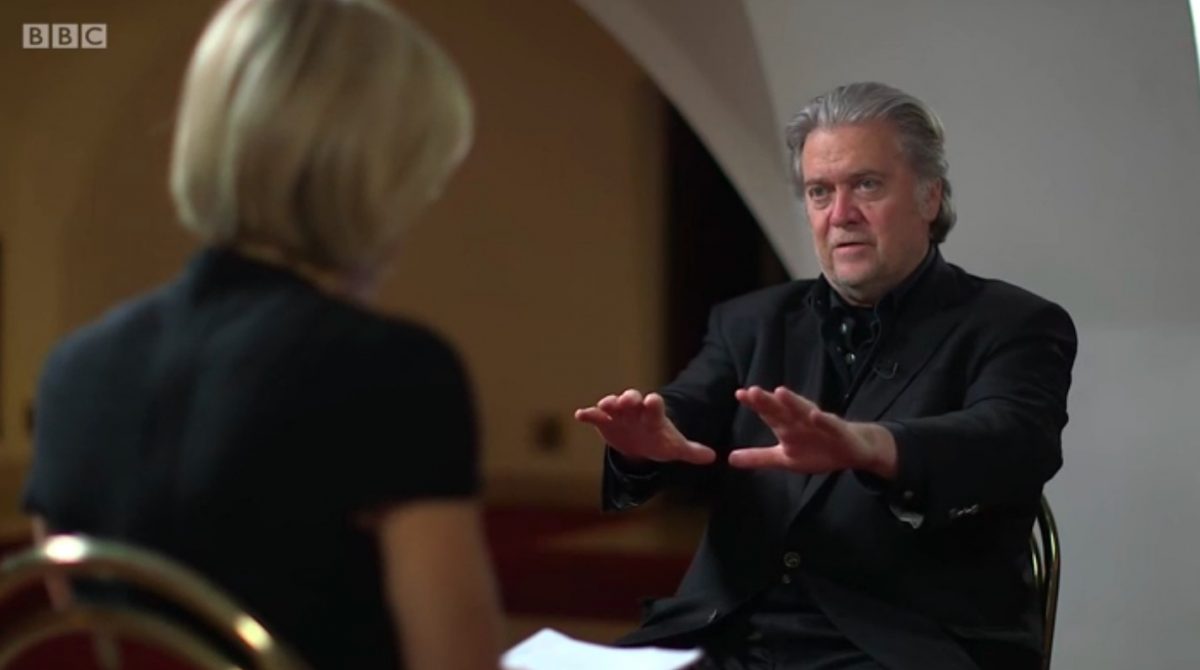 Ever since Steve Bannon‘s fall from MAGA-grace (after being fired from his senior White House position he returned to Breitbart, and got the boot there soon afterwards) the rumpled nationalist has been in exile in Europe.

In between giving talks to right wing parties and palling around with Greek aristos, Bannon sat down for an interview with BBC Newsnight, set to air Wednesday evening in the UK.

The BBC released snippets of the sit down, which include Bannon dishing on the Russia investigation and hailing President Donald Trump‘s accomplishments in office — among them, the low unemployment rate.

“If you look at the policies of Donald Trump, anybody — Martin Luther King would be proud of him, of what he’s done for the black and Hispanic community for jobs.”

BBC anchor Emily Maitlis made sure she heard him correctly: “You think Martin Luther King would be proud of Donald Trump as president?”

“His economic policies — by the way it’s the lowest unemployment in recorded history,” Bannon replied. “You don’t think Martin Luther King would be proud? Look at the unemployment we had in the black community five years ago. You don’t think Martin Luther King would sit there and go: ‘Yes, you’re putting young black men and women to work. There’s the lowest unemployment we’ve had in history. And wages are starting to rise among the working class. And you’ve finally stopped the illegal alien labor forces coming in and competing with them every day, and destroying the schools and destroying the healthcare.’ Yes, Absolutely.”

There you have it folks, from the mouth of an expert: MLK would have totally been on board the MAGA train.

Martin Luther King “would be proud of” Donald Trump.