Stewart Lambastes Christie Over Special Election: ‘Self-Serving, Corrupt Abuse Of Power… I Miss NJ So Much!’ 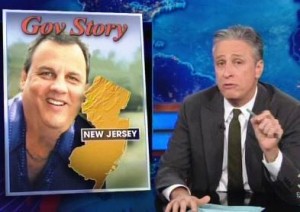 Stewart said that if no conventional options could be agreed on, Christie could just “drive five guys in a van down to the Pine Barrens at midnight, and by the time morning comes, you got one senator in the car.”

He called out Christie for specifically saying in 2009 that if Lautenberg died, he wouldn’t think it very responsible for a governor to call for an October election that would cost the taxpayer ten million dollars. So Stewart was baffled at how he now okayed an “irresponsible” special election that would cost over twenty million dollars. And in spite of Christie’s justification that cost is irrelevant compared to the importance of having representation in the Senate, Stewart remarked that it’s only three weeks, and “three weeks of works in the Senate is basically 28 lobbyist meet-and-greets, 14 days of old man smell acclimation, and six filibusters.”

But Christie may very well have scheduled the election early to avoid being on the ticket at the same time as popular Democrat Cory Booker. Stewart decried the “self-serving, corrupt abuse of power,” though as he said the words he weepingly opined, “I miss New Jersey so much!”

After some fun at the expense of Christie’s opponent, Stewart ended by trying to find the right words to respond to Christie with, and just used footage of Christie himself calling people stupid. “I’m with that guy!”