Stewart Rips Obama For VA Backlog: ‘When Unobstructed From Doing What You Want, You Better F**king Bring It’ 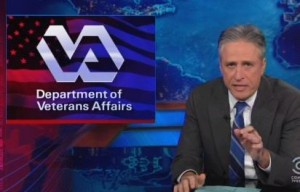 Jon Stewart tonight took on the backlog at the Veterans Administration, with thousands of veterans having to wait for way-too-long periods of time. Stewart used the segment to tear into the Obama administration for previously stating that the only thing getting in the way of the government taking care of people is Republican obstruction. In fact, Republicans have supported the V.A., and Stewart told the president that “when you’re not obstructed from doing what you want, you better fucking bring it.”

Stewart summed up Democratic complaints by saying “because of Republicans, nothing can pass through the legislative body,” and likened efficient government to getting Washington ready for bikini season. He ripped into the V.A. for not being able to handle the same kind of heavy customer flow as McDonald’s, and “they are run by a clown.”

But despite Democrats insisting Republicans are to blame for government holdups, it turns out that this it’s actually just a mess of bureaucracy between the V.A. and Department of Defense using two different computer systems that do not communicate with each other. With one analogy likening it to the incompatibility of an Xbox and PS3, Stewart said that like in a household, the nation’s ultimate parent (President Obama) could just easily command his children to only use the Xbox.

Stewart said, “When you’re not obstructed from doing what you want, you better fucking bring it.” He said that if the U.S. government has the kind of technology to “create flying unmanned robots,” it should be no big deal to create a simple spreadsheet program so that U.S. veterans don’t have to wait months or years for paperwork.