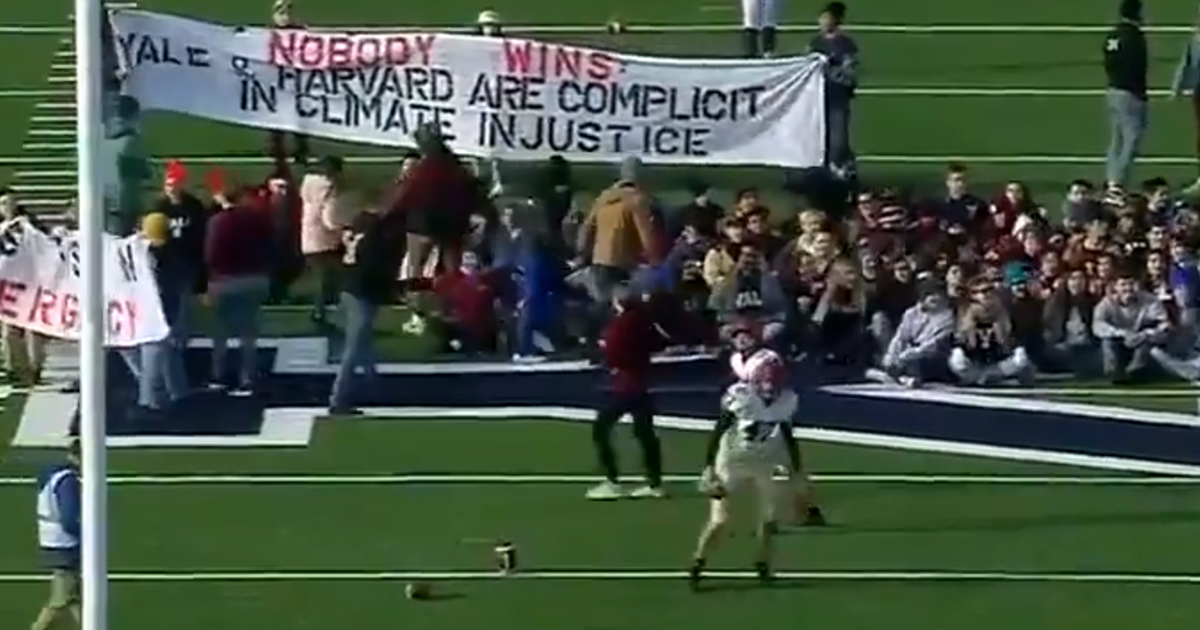 In New Haven, Connecticut on Saturday, students from both Harvard and Yale took to the field at halftime to stage a “sit-in” protest over climate change. When it came time for the game to resume the students remained on the field, getting a lot of media and online attention.

At halftime of Harvard-Yale a sit in protesting climate issues has broken out on the field, at least delaying the second half and the way the protest is growing I would be shocked if the game continues. pic.twitter.com/2BWCU2fLuI

Shouting things like “Hey hey, ho ho, fossil fuels have got to go,” the students held up signs accusing their respective schools of being “complicit” in “climate injustice.”

Yale-Harvard is under delay because of a student protest. We’ve hit peak 2019. pic.twitter.com/Am5e12U2el

TIME reports that when it came time for the game to resume, officials began making announcements over the PA system: “As a courtesy to both teams, the game must resume.” New York Post sports columnist Joel Sherman tweeted a photo and said that many of those who streamed on the field to join the protesters left voluntarily, but some stayed.

Eventually, after an hour delay, the game resumed.

Protesters for the most part left peacefully, often with security and police escorts. The second half of Harvard-Yale has begun after roughly an hour delay.

“We ar Demanding” Harvard and Yale “to divest from fossil fuels,” wrote the Ivy League students.

That’s right! We’re disrupting The Game because we know that #NobodyWins when our universities profit from destruction and extraction. We ar Demanding #HarvardYale to divest from fossil fuels and cancel their holdings in Puerto Rican debt. https://t.co/ERFWhvUQDX