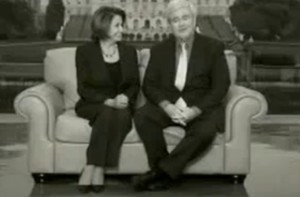 Newt Gingrich is the former Speaker of the House. And Nancy Pelosi also used to hold that title. And the similarities between the two don’t end there. Although embraced by their followers, they’re absolutely reviled by those with opposing views: The New York Divide congratulated Pelosi for making a “most corrupt” list three years in a row; the Star-Ledger called Gingrich “the sluttiest streetwalker on K Street.” And these are just the nice comments.

In a weird example of the pendulum swing of partisan politics, the vilification by on party gives credibility and power within one’s own party. Even with their strong personalities and political profiles, the two had managed, thus far, to stay out of each others’ respective ways. Until Pelosi told Talking Points Memo on Monday that:

“One of these days we’ll have a conversation about Newt Gingrich,” Pelosi told Brian Beutler. “I know a lot about him. I served on the investigative committee that investigated him, four of us locked in a room in an undisclosed location for a year. A thousand pages of his stuff.”

Gingrich responded that he welcomed those talks, pointing out that anything Pelosi reveals from the private sessions is against House ethics rules. Pelosi backed down later on Monday, with her spokesman saying she was referring to public record.

This will likely not be the last of the tussles between the dueling Speakers. So we present the tale of the tape — a quick refresher on what you need to know about Gingrich and Pelosi: