Tearful Nancy Grace On Cancer Scare: “I Know That God Was With Me” 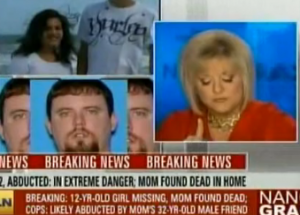 HLN’s Nancy Grace returned to work Monday night after taking time off for extensive emergency surgery to remove a lump that the host feared was cancer, but was ultimately found to be benign.

Grace called into her show from a hospital last week to tell viewers about the “feeling” she had that led her to a doctor’s appointment and the discovery of a mass, but on her return she made no mention of the incident–diving right back into her standard format.

It was a viewer’s phone call that stopped the host in her tracks and moved her to tears:

BRIANNA: Hi Nancy, so glad you’re back. We’ve been praying for you.

It was a nice moment in a typically high-octane and intense show. Though it was a touch jarring to have the emotional host speak of the power of prayer while the “breaking news” banner continued to scroll and the pictures of a missing girl and a suspected abductor continued to play in two large boxes on the screen. Just saying.