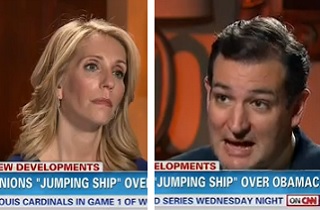 In its continued campaign to virtually ignore Sen. Ted Cruz‘ (R-TX) crusade against Obamacare, the cable news media hid Cruz in plain sight on several Sunday political talk shows, including CNN’s State of the Union. During his interview with Dana Bash, Cruz delivered a devastatingly accurate media critique that, in truly meta fashion, applied most fittingly to the interview he was in the middle of giving.

As a liberal who does not support the repeal of Obamacare, there is not much that I agree with Ted Cruz about, but during his interview with Dana Bash Sunday morning, the Texas Senator delivered a blisteringly accurate critique of the media’s coverage, both of the government shutdown and the policy difference that caused it. As a news consumer, I could not agree more with Cruz.

Bash was pressing Cruz on the political effects of the shutdown, particularly with regard to fundraising. “Some colleagues think that’s what this was about,” Bash said. “This was a ruse to raise money for this group, and others, in order to take out your fellow Republicans.”

Cruz replied, “You know, Dana, it is amazing how many people in Washington want to focus on politics, at the expense of all else.”

Cruz was reading the minds of anyone who had watched the rest of Bash’s interview, which featured exacty zero questions about the policy, no matter how hard Cruz tried to shake one loose.

Cruz is exactly right, in that any news consumer, right, left, or center, would hear that passage and say to themselves, “Yes, I want to be informed about all of the businesses that aren’t expanding, and people being forced into part-time work, or, as Cruz would claim a few moments later, the skyrocketing premiums and jobs being killed, and this special exemption for Congress he’s speaking of.

Instead of asking him about any of that, Bash cut in to say “You made a lot of money — was it a moneymaking enterprise?”

“Not remotely,” Cruz replied, although raising money is not mutually exclusive to achieving policy goals.

“Listen, this is a deliberate strategy,” he continued. “The strategy in Washington is to launch personal attacks, and to encourage the media to do what a lot of folks in the media like to do, which is cover this like it’s a Hollywood gossip column. This politician versus this politician, who’s up? Who’s down? Who’s mad?”

“Sir, you’re the one that is starting to choose sides against your own colleagues,” Bash said.

Cruz went on to make several more substantive claims about the Affordable Care Act, then said “I understand you want to draw me into the back and forth with other Republican senators. That’s fun to cover. I’m not interested in playing that game.”

Ironically, even when it came to the Hollywood gossip aspect of the interview, Bash couldn’t get that right, either.

Set aside, for the moment, whether or not you think Ted Cruz would gain from that sort of substantial coverage (I believe he would not), what he is calling for is exactly the right thing: media coverage that informs the public, in the interest of the public. Throughout their interview, Ted Cruz made substantive claim after substantive claim, yet Dana Bash elected to ask him not a single question about any of them. Here’s what she asked instead:

Dana Bash is not the exception in the media’s coverage of the Obamacare debate, which has been characterized by superficiality and absurdity, but that she managed to maintain that sort of coverage directly in the face of Cruz’s critique is somewhat remarkable.

You can watch the rest of the interview here, from CNN.