The Daily Caller‘s James Poulos Defends ‘What Are Women For?’ On Up With Chris Hayes
video

The Daily Caller‘s James Poulos Defends ‘What Are Women For?’ On Up With Chris Hayes 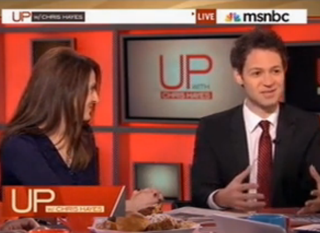 Earlier in the week, the Daily Caller‘s James Poulos penned a piece on modern feminism entitled “What are Women For?,” arguing that the idea that the left is united on the feminism front was problematic and, in turn, that the liberal tendency to tell people what to do naturally challenges the feminist idea that women shouldn’t need to do anything in general. Naturally, this didn’t go over too well with, well, almost anyone, but Poulos found arguably the least hospitable venue to go an defend his work: Up with Chris Hayes, where the panel tried to deconstruct every element of his argument and explain why it was received so coldly by readers.

RELATED: Curious Daily Caller Writer Wants To Know: ‘What Are Women For?’

The column ventures all over the place as far as the point of feminism– save the divides in Republican feminism, a point panelist Victoria DeFrancesco Soto argued. Poulos begins arguing that the birth control issue is still evolving from the positions of Justice Sandra Day O’Connor, but pivots from the courts to the culture wars and hits on Sex and the City star Cynthia Nixon telling, “The New York Times Sunday Magazine exactly what establishment liberals don’t want to hear when it comes to the sexual politics of women — ‘you don’t get to define my gayness for me.’” While many have argued that the key line of the piece is either the title or the colorfully alliterative phrase “the purpose of lifting the left’s Potemkin skirts is not to score tits for tats,” the bigger issue raised in the piece seems more aptly summarized in this line: “The left’s culture of celebration is hamstrung by the very assertions of should and shouldn’t that contemporary women have inevitably come to make — as the ongoing debate over the advisability of marriage reveals.” In other words, the rejection of “live and let live” philosophy on the left necessarily clashes with what Poulos describes as a “culture of celebration” of diversity in thought and objective.

The title of the piece took up much of the beginning of the chat, however, as host Chris Hayes explained his problems with the presentation of the work, particularly the title: “It seems, I think, an odd question to ask about human beings. who are presumably for whatever their own ends are for.” He noted that many readers perceived it as a natural slippery slope decline from asking whether women can control their sexuality to, ultimately, “the essential humanity of women.”

Poulos explained that the questions he posed revolved around the culture battles regarding reproductive rights and why they persisted. He explained that his answer to this question was “because there is a deep argument in this country about sort of what the relationship is between our biological bodies as men and as women and how that biology relates to what it is we do in society, and what our different roles are.” Hayes was comfortable with that answer, save for the fact that “it doesn’t seem that the ‘as men’ part gets as much attention,” to which Poulos replied there simply “isn’t as much disagreement” as to what men are supposed to do.

Michelle Goldberg vehemently disagreed with this premise. “When you say ‘what are women for?’ you’re necessarily implying, ‘in relation to who?'” She added that a similarly posed question about minorities would be met with scorn, to which Hayes joked, “I wrote a column the other day, ‘What Are Jews For?’, it didn’t seem to get much controversy.” Goldberg saw his piece as symptomatic of something bigger on the right, as the perception of feminism (and civil rights) “as a once worthy movement that has attained all of its goals and has become superfluous.” As mentioned before, DeFrancesco Soto argued that the piece was too one-sided, that as far as it discussed feminism, it ignored the debate on the right between Sarah Palin and Phyllis Schlafly feminism. Poulos ceded the point as “insightful” but noted later that the bigger issue was where this led the culture wars, that it was “a deep-seeded political difficulty” and “we’re going to be stuck in this cultural situation regardless of the respective merits of the issue.”

While Poulos did not seem to convince anyone of his point– though proved that it may be a significantly more convoluted than the simplistic title implies– he did prove, at the least, that Up with Chris Hayes can host a conservative polemic on sensitive cultural issues and have a heated conversation without it disintegrating into a shouting match no matter how offensive some of the panelists might find his work. In fact, Goldberg, who appeared the most put off by Poulos’ piece, was the one to praise him the most for defending it after the fact, later tweeting, “The “What Are Women For?” piece was egregious, but I give @jamespoulos credit for braving such an unfriendly audience to talk about.”