The Daily Show Uncovers The Nazis’ Secret Gay Past 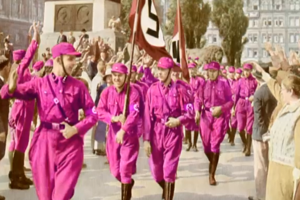 More than half a century later, the journalists of The Daily Show have uncovered the real reason for the inhuman cruelty of the Third Reich: every last one of those Nazis was gay. Or at least that’s what Scott Lively, the president of the organization Defend the Family, contends. In search of the truth, Jason Jones went deep into the heart of New York’s gay community to find evidence for Lively’s argument.

Lively argues, with full certainty, that all the soldiers in the Nazi army, and especially Adolf Hitler and the people in his inner circle, were gay. The reason for the high concentration of homosexuality in the Naxi party, according to Lively? “Adolf Hitler,” he explained, “used homosexual soldiers because they were more savage than natural men… They didn’t have the restraint that a normal man has, and so it was easier for them to do some of the terrible things the Nazis did.” And not only were the Nazis gay, “they met in a gay bar.” As for that whole “persecution of the Nazis” thing, Lively contends that the Nazis persecuted gays to”distract public attention away from their own homosexuality.”

To experience the savagery of gay soldiers first-hand, Jones put on a riot-proof suit and trekked on to the New York Gay Community Center, where he sat down with a number of real-life gays, including LGBT rights activist Lt. Dan Choi, and discussed their secret Nazi past. Needless to say, it was scarier than anything Jones could have imagined.