The Five Rips Ted Koppel’s Terror Comments: ‘We Have To Overreact’ 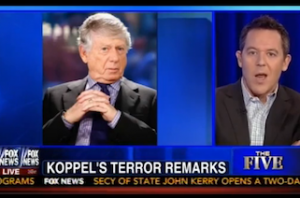 Greg Gutfeld closed out The Five Monday by taking on Ted Koppel for comments he made on “the Sunday show for people who eat kale” (NBC’s Meet The Press) about terrorism and America’s “overreaction” to it. Gutfeld said the “bad guys love” when we start talking about the U.S. “overreacting” to terror threats.

Eric Bolling took Gutfeld’s lead and ran with it, saying, with no sense of irony, “We have to overreact.” After 9/11, Bolling argued, “you want the overreaction, you want the excess caution.” He called Koppel’s comments “insanity,” adding, “I’m not sure why he did it. I literally don’t get his point, other than it got him on Meet The Press.”

Bob Beckel went the other way, saying he “agrees” with Koppel. “I think we have gone way overboard on this,” he said. “What these guys have done after 9/11, is convinced us to starts a huge bureaucracy, overlapping bureaucracies of guys who are out there trying to catch terrorists. I just think the whole thing, we need to do it, but don’t need to do it the way we do it now. It is much too much.”

And finally, Kimberly Guilfoyle chalked up Koppel’s comments to the fact that he’s “getting older” and Dana Perino complained about not knowing whether her lip gloss was a liquid or not when she recently went through security at the airport. If you want to talk about an overreaction, Perino said, “it’s the NSA program.”