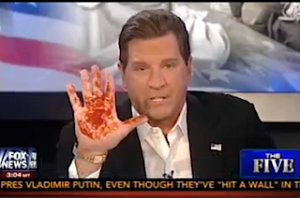 Fox News’ Eric Bolling went full Code Pink Wednesday afternoon, adopting that group’s latest protest tactic by rubbing ketchup all over his hand and holding it up on live television in opposition to military action in Syria. “We should be careful before we shed any more blood, ours or theirs,” Bolling declared. “This is not our war.”

Bolling began by going after President Obama for claiming he “didn’t a red line” on Syria, before saying there was something important he needed to do. The host then held up his “bloody” hand, as his co-hosts chuckled, and delivered these prepared remarks:

Greg Gutfeld wanted to know if Bolling got the ketchup from Secretary of State John Kerry, while Dana Perino joked that he got it from the “Code Pink store.”

Perino added that one could argue that “we have blood on our hands by not acting up to now” in Syria, since Bashar al-Assad’s regime has killed more than 100,000 people without the use of chemical weapons.

While Perino tried to seriously answer his question, Bob Beckel simply asked, “Can somebody bring Eric some napkins so he can get this stuff off his hands?” He later attempted a more salient answer, saying it’s because “we’re the only ones with capability to take out their capability.”

“That’s the most asinine comment,” Bolling shot back, saying there are plenty of other countries who could step in. “It is against our Constitution, too. Congress has to declare war. President Obama said we’re going in with 200 tomahawk missiles is a joke, that’s war.”