The Jinx Director Jarecki: ‘No Deal’ over Timing of Durst Arrest
VIDEO

The Jinx Director Jarecki: ‘No Deal’ over Timing of Durst Arrest 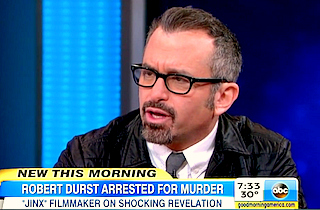 The Jinx director Andrew Jarecki spoke to Good Morning America Monday morning about the stunning finale of his six-part HBO documentary, which ended with wealthy suspect Robert Durst apparently confessing to three murders — on the same day Durst was arrested in New Orleans in connection with one of the homicide investigations.

George Stephanopoulos asked him about what Durst’s attorney called the suspiciously fortuitous timing of Durst’s arrest. “Were there any kinds of deals over the timing of the arrest?”

“In fact, we were very nervous about it,” Jarecki continued. “I was on the phone with our main contact in law enforcement at 4 o’clock in the morning two nights before, and I was saying, ‘I’m uncomfortable, I have security, my family’s uncomfortable, and I feel that this arrest should be made, but I understand that you need to what you need to do. But tell me where we are.’ I didn’t get any color on it.”

Jarecki also discussed the awkward spot of when to go to the authorities with the evidence they had gathered, especially with the confession, which was discovered two years after it had been made. “We have been in contact with law enforcement for the past two years,” Jarecki said. “So when we finally found that subsequent admission what happens in the bathroom, we contacted them and said we have something more.”