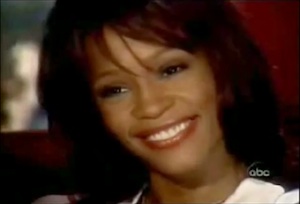 In the wake of Whitney Houston‘s shocking death Saturday, allegedly from a lethal combination of Xanax and other prescription drugs mixed with alcohol, many people are revisiting her infamous December 2002 interview with Diane Sawyer in trying to make sense of how one of the world’s biggest pop stars began a downward spiral that ultimately ended in tragedy.

Sawyer gave the interview at Houston’s Atlanta home as part of the publicity blitz for her then-upcoming album, Just Whitney, and it ended up becoming one of the most startlingly revealing Q&As of the R&B singer’s life.

Most of the attention given to the interview — right or wrong — was focused on her notorious “crack is wack” response to Sawyer’s reiteration of a tabloid headline (“First of all, let’s get one thing straight. Crack is cheap. I make too much for me to ever smoke crack. Let’s get that straight, OK? I don’t do crack. I don’t do that. Crack is wack” ). Less publicized, but perhaps more illuminating, was an answer she gave shortly after.

Sawyer asked the singer about her drug use, “Is it alcohol? Is it marijuana? Is it cocaine? Is it pills?”

“It has been, at times,” Houston acknowledged.

“If you had to name the devil for you, the biggest devil among them?” Sawyer followed up.

“That would be me,” Houston tellingly replied, as she tilts her head and gives a haunting, ear-to-ear grin.

This disturbing response may prove to be the moment of no return for the pop star.

Watch the segment via ABC News: