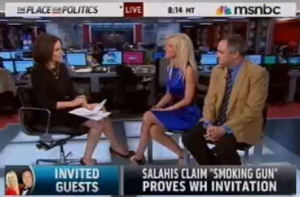 Ah, Michaele and Tareq Salahi. Can we ever get enough of them? Well, actually, we most definitely can. However, the Salahis love to discuss themselves at every possible chance (except for this one), so we’re going to be stuck hearing about their elegant DC adventures until television networks finally decide to stop giving them airtime.

Today they were on MSNBC to talk about their latest run in with the Secret Service. Considering all the rumors that the Salahis will be starring in a series on MSNBC’s sister network Bravo soon (coincidence!: they also showed up on the Today show this morning), the Salahis were probably expecting a puff piece interview. But that is not what MSNBC’s Lynn Berry gave them. Things got very uncomfortable, very quickly.

Since I’m going to assume that many of you could care less about what the Salahis have to say (blah blah blah, it’s all a misunderstanding, it’s the media’s fault for blowing it up, blah blah), I suggest that you instead use the interview as a demonstration in what happens when public personas begin to slip. Watch as Lynn Berry’s cheerful TV facade gives way to the hatred of this couple buried underneath (probably beginning around the point when Michaele condescendingly tells her she doubts that Berry’s ever been to a big fundraiser before). Then delight as the Salahis begin to lose their heavily rehearsed friendly exterior (starting right after Berry has the gall to ask a follow-up question). My favorite point is the withering glare that Berry gives them right around the 6:07 point of the video below. Seeing it, I’m personally shocked that the couple didn’t melt right there on the spot.

Normally I’d say that the Salahis were the losers of this segment. However, they did get on television and, in the fame-hunting game, the standards for victory are very low.