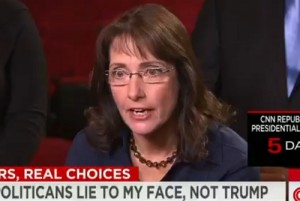 A group of ardent Donald Trump supporters appeared on CNN Thursday morning to defend his “thousands and thousands” comment about Muslims cheering in the streets of Jersey City on Sept. 11, 2001. Most of what they said was unsurprising given previous interviews with Trump supporters, but Susan DeLemus‘ closing comments stood out in a big way.

Mainly because her Trump-esque performance was so good, she just stole the “Bonkers CNN Guest” crown from Paula Johnson, the co-chair of the New Hampshire-based Women for Trump organization.

“I don’t believe any one of them. I believe Donald. I’m tell you, he says what I’m thinking!”

Throughout this segment, DeLemus gestures frequently — pointing to her head on “thinking” or waving her finger in a “no-no” fashion on “lying.” It almost seems as if she’s on the verge of tears when admitting her belief in what Trump has said on the campaign trail.

Perhaps the most interesting bit, however, is when DeLemus’ words conclude the segment with a kind of admission that could either apply to herself or to Trump.

“Never been involved in politics. Never had an interest in any of it. Now suddenly he is resonating. He is resonating with the people, and he is speaking our minds. Our minds. When the pundits, and the experts, and all the people who are supposed to be ‘in the know,’ and know all this stuff, and they’re so great — I know,” she said, “some of them are lying to me. Straight to my face. And I am so sick of it.”

As Gawker points out, DeLemus is actually a Republican New Hampshire state representative and has been in office since January 2015. So if her “never been” comments are supposed to be about herself, then she’s a little off the mark considering her subsequent use of the word “suddenly.” If they’re about Trump’s interest in politics, then DeLemus is either lying or doesn’t actually know anything about her candidate’s history.

Either way, her piercing eyes could cut through diamonds. “Thousands and thousands” of diamonds.