‘This Is Conjecture’: Matthews Suggests Christie Studied Nixon to Distance Himself from ‘Bridgegate’
video

‘This Is Conjecture’: Matthews Suggests Christie Studied Nixon to Distance Himself from ‘Bridgegate’ 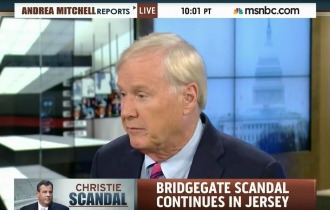 On Wednesday, MSNBC host Chris Matthews appeared on Andrea Mitchell Reports where he submitted a unique theory which implicates New Jersey Gov. Chris Christie in the scandal surrounding the closure of two lanes of the George Washington Bridge. Matthews said that Christie, just like former President Richard Nixon, he was able to create distance from himself and his aides in order to get away with the intimidation of his political opponents.

Matthews remarked that Christie appeared with two key members of the scandal on the anniversary of the September 11 attacks in 2013, a period when the bridge closures were ongoing. Matthews said that Christie conspicuously avoided excessive contact with one of those advisors implicated in the scandal.

“I do think there’s a lot here about Nixon,” Matthews said. He went on to outline how Nixon’s aides were able to execute a variety of break-ins and surveillance operations without ever being specifically ordered to do so by the president.

“And then he got caught with Watergate, and he knew — Hey, I didn’t order Watergate, but I ordered this other stuff. My God, this looks like my guys did this,’” Matthews added. “That may have been on Christie’s mind from day one.”

“The minute he heard about the bridge closing, he may well — this is conjecture — have known this the kind of thing I wanted my people doing,” Matthews submitted. “I never ordered them, I’m covered, as long as I don’t talk to them, I’ll never be blamed for it, so I’m going to keep radio silence.”