This White Supremacist Wants You to Join the Inclusive, Racially-Diverse KKK
Everyone's So Damn PC These Days

This White Supremacist Wants You to Join the Inclusive, Racially-Diverse KKK 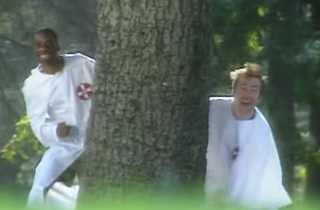 A notorious white supremacist from Montana is determined to make his local Ku Klux Klan chapter a bastion of diversity and inclusiveness. Yes, that is a sentence we just wrote.

“The KKK is for a strong America,” John Abarr, a longtime member of the KKK, told the Great Falls Tribune, and announced that he was starting his own chapter called the Rocky Mountain Knights.

Abarr, who says he’s reformed, insists that his Klan will be just an “all-inclusive” fraternal organization, and will accept members regardless of race, religion or sexual orientation. “White supremacy is the old Klan. This is the new Klan,” he said.

But what is a Klan, if it goes against its own purpose? A bird must fly. A fish must swim. And a Klan must protect the sanctity of white Christian hetero-normativity. It’s the nature of things, says the KKK:

Abarr’s latest actions have enraged the United Klans of America, according to Bradley Jenkins, imperial wizard for the organization…

“That man’s going against everything the bylaws of the constitution of the KKK say,” Jenkins said. “He’s trying to hide behind the KKK to further his political career.”

Even human rights advocates are wary of Abarr’s reformation. “If John Abarr was actually reformed, he could drop the label of the KKK,” said Rachel Carroll-Rivas, co-director of the Montana Human Rights Network. (So either Abarr is being completely tone-deaf, or he just has waaaaaaaay too much KKK-branded merchandise that he needs to get rid of.)