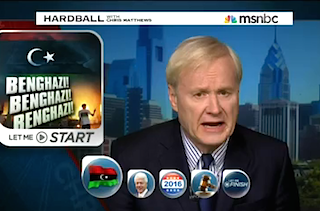 During the 7 p.m. ET hour Thursday night, MSNBC’s Hardball with Chris Matthews came in last place in the 25-54 demo, behind Fox News, CNN and HLN. Fox’s On the Record with Greta Van Susteren was #1 with 286K viewers, followed by HLN’s Jane Velez-Mitchell with 95K and CNN’s Erin Burnett Out Front with 94K. Chris Matthews came in fourth with just 83K viewers.

In total viewers, Matthews did a bit better, coming in second place with 678K, ahead of Erin Burnett’s 383K, but behind Greta Van Susteren’s 1.668M.