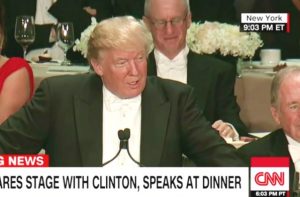 In the 9 pm hour last night, when everyone was watching the dinner, 3.583 million people were glued to Fox News, but a whopping 3.851 million watched on CNN.

Sean Hannity‘s post-dinner coverage in the 10 and 11 pm slots, however beat out Don Lemon in both hours (though we should note that Hannity’s 11 pm ratings––1.588 million––was beaten out by Brian Williams––1.618).

But even more remarkably, every single CNN show from Jake Tapper to Lemon last night all beat out Fox News in the 25-54 demo. Yes, all of them.