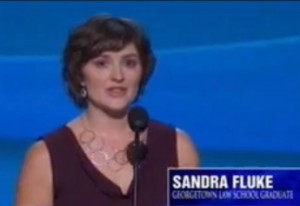 Much to the likely disappointment of Fox News personality Bill O’Reilly, the Democrats did not greet attorney and activist Sandra Fluke with a rain of condoms for her convention speech, but Fluke did drop an elbow on the Mitt Romney/Paul Ryan ticket over their party’s extreme policies on reproductive rights.

Sandra Fluke was thrust into the national spotlight when conservative media giant Rush Limbaugh launched a sustained “slut”-laden attack on her for daring to testify before Congress in favor of women having contraception covered by the insurance that they pay for. At the time, Republican presidential candidate Mitt Romney refused to denounce Limbaugh, saying only that “That’s not the language I would have used.”

Since then, Ms. Fluke has become a celebrity among people who respect women’s rights, and a villain to the right. Her speech before the Democratic National Convention tonight was the culmination of that dynamic, and she did not disappoint.

Fluke took the stage a few slots late, causing some conservatives to prematurely celebrulate, but for the DNC crowd, it was well worth the wait. She began by recounting the events that made her famous, then blasted Mitt Romney over his cowardice in the face of Rush Limbaugh.

“Your president could be a man who stands by when a public figure tries to silence a private citizen with hateful slurs,” Ms. Fluke said. “A man who won’t stand up to those slurs, or any of the extreme, bigoted voices in his own party.”

Fluke continued, “It would be an America in which you have a new vice president who co-sponsored a bill that would allow pregnant women to die preventible deaths in our emergency rooms. An America in which they humiliate women by forcing us to endure invasive ultrasounds that we don’t want, and our doctors say that we don’t need. An America in which access to birth control is controlled by people who will never use it. An america in which politicians redefine rape, and victims are victimized all over again. In which someone decides which domestic violence victims deserve access to services and which… don’t.”

Sandra Fluke then laid out the case for President Obama, whom she said “when he hears that a young woman has been verbally attacked, thinks of his daughters, not his delegates or his donors.”

She described an America “in which no one can charge us more than men for the exact same health insurance. In which no one can deny us affordable access to the cancer screenings that could save our lives. In which we decide when to start our families.”

Fluke finished her short, bitingly sweet speech with a choice, between “a country where our president either has our backs, or turns his back. A country that honors our foremothers by moving us forward, or one that forces our generation to refight battles that they already won. A country where we mean it when we talk about personal freedom, or one where that freedom doesn’t apply to our bodies or to our voices. We talk often about choice. Well, ladies — and gentlemen… it’s now time to choose.”

Fluke’s speech was, pound for pound, minute for minute, one of the most powerful of the convention so far, and a tough act for former President Bill Clinton to follow.