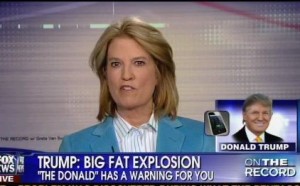 Donald Trump stopped by On The Record to share his thoughts on the impending sequester with Greta Van Susteren. Trump dismissed the hypo over the spending cuts, saying that they should be much deeper, and predicted that if the government avoids making any serious cuts for the next few years, there will be a “big fat explosion and it’s all going to come to an end.”

Trump said “not a lot is going to happen” as a result of the automatic sequester, dismissing the “over-exaggerated” alarm and added that the cuts do not go far enough. He told Van Susteren that the nation is going to have to endure far deeper spending cuts in order to get a balanced budget.

Van Susteren asked Trump what would happen if the U.S. government resists the urge to cut spending. Trump predicted that if this happens, then in a few years there will be a “big fat explosion” in the nation’s economy and “it’s all going to come to an end.” He acknowledged that action should be taken to make the United States great again, “because it’s not that great right now.” He attributed the nation’s economic woes to both incompetence and partisan politics.

Trump allowed that it was a widespread problem in government, but ultimately “the president is your leader,” blaming President Obama for being unable to fix the broken economy in his first four years. He predicted that in 2016, China will become the dominant economic superpower, and they will have done it “on our back.”

Van Susteren ended by asking if Trump has any presidential aspirations in 2016. Trump said he does not, adding that he loves the United States and would be happy if the president could make the country great again, but said that’s not likely to happen any time soon.