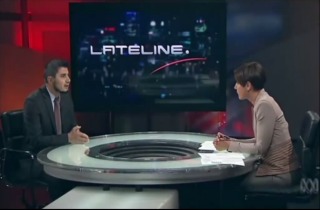 Throughout the ISIS conflict in Iraq and Syria, U.S. news outlets have taken to interviewing reps from Muslim groups in hopes of getting them to condemn the actions of ISIS abroad.

Fox News host Sean Hannity and CNN host Brian Stelter both interviewed British cleric Anjem Choudary in August, who has refused to condemn the tactics employed by ISIS. And now, an Australian news anchor is being praised for her “feisty” interview with Wassim Doureihi, the Australian spokesperson for the Islamic group Hizb ut-Tahrir, in which she pushes him to condemn the very same tactics.

Anchor Emma Alberici asked Doureihi if he condones the beheading of innocent journalists and aid workers, and after Doureihi was very clearly trying to avoid giving a response, Alberici said, “answer my question, please.”

“You are clearly obfuscating, and I did not invite you onto this program to do that,” Alberici said. “Why will you not, point blank, condemn the actions of IS fighters? Men that cut off the heads of innocent journalists and aid workers.”

Doureihi said the question was “offensive,” and used an argument similar to that of Anjem Choudary, saying the foreign policies of the U.S., Britain, and Australia have “directly” killed millions.

Still, though, when given multiple opportunities to condemn the actions of ISIS on a national platform, Doureihi would not do so.