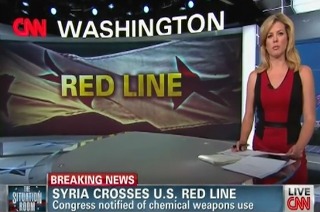 The White House announced on Thursday evening that it had confirmed that the Syrian government crossed the “red line” President Barack Obama set in August, 2012, when he insisted that the use of chemical weapons would result in a response from the West. The news prompted some to demand the White House back an overwhelming response to end the Syrian civil war rather than a minor escalation, like providing arms to the rebels, which would invite reciprocal moves by Syrian President Bashar al-Assad’s Iranian and Russian allies.

Sen. Saxby Chambliss (R-GA) told reporters on Thursday that Syria crossed the “red line” months ago. He backed whatever the next steps would be.

CNN then cut live to the Senate floor where Sen. John McCain (R-AZ) thanked the administration for acknowledging what the international community has been aware of for months. He pleaded with the White House to pursue an overwhelming force strategy which would dissuade Assad’s international allies from attempting to escalate the conflict.