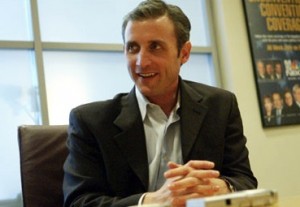 How is it the case that we are the last to know what is going on with our dear old founder Dan Abrams. As has already been reported on what seems like dozens of websites and media outlets already, it appears that Dan is leaving NBC, his network home of fifteen years, to embark on a new chapter at ABC. While we wish him luck, we also wish that he may have been willing to share some information with his staff at Mediaite, after all we cover Media.

We first learned of the story on WWD, from the up-and-comer Zeke Turner who scooped fellow cable news media scribes with a report that Dan was in talks with ABC to become a “legal analyst with Good Morning America and the opportunity to pick up shifts as an anchor on the program.” Shortly thereafter, Politico’s Patrick Gavin provided some more color on the potential network move, noting that “Abrams’s long-standing relationship with ABC News President Ben Sherwood could very well have been a key factor in this decision.”

Later the story was picked up on Business Insider’s The Wire, as well as Huffington Post and TV Newser, completing the “royal flush” of cable news coverage in the wildly enviable and unbelievably glamorous game of media news and aggregation. Gawker then got in the act and reminded us why their unnecessarily mean-spirited style has grown tired, and not at all consistent with the dawning new age of civility in tone and discourse. Alas. (Abrams has also clarified on numerous occasions that Abrams Research does no PR work.)

Who was the latest to the game? Mediaite. When reached for comment, Abrams sipped from his Ramos Fizz, adjusted his smoking jacket and asked for the reporter’s name again. When he was reminded the the so-called reporter was in fact the Managing Editor of Mediaite, he mumbled something unintelligible about “trying to go to DisneyWorld” then politely said “Good day.”