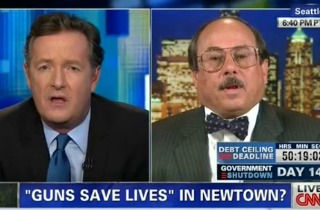 On Monday night, Piers Morgan invited Second Amendment Foundation founder Alan Gottlieb on his program ahead of his organization’s protest for the day after the first anniversary of the massacre at Sandy Hook Elementary. The interview exploded quickly when Morgan became incensed after Gottlieb accused the CNN host of appealing to excessive rhetoric.

The interview began in a hostile foundation and exploded when Gottlieb laughed at Morgan after he quoted the family member of a victim of the massacre at Newtown.

“You plan a campaign to promote the good side of guns on the first anniversary of the worst mass shooting at a school in American history, and you have the gall to laugh when I read out a quote from one of the victim’s families? How dare you,” Morgan shot back. “How dare you laugh.”

“That doesn’t allow them to use that day either to attack my rights,” Gottlieb countered. “How many times a year do you attack gun rights on your show?”

“I bet you’ll use that day to push your anti-gun agenda,” Gottlieb challenged.

“You’re damn right I’ll use that day to promote gun safety in America,” Morgan added. “And I’ll do it on behalf of these families.”

“You don’t know about my heart,” Gottlieb said. “That’s probably why you don’t have as many viewers as anybody else, because people have turned you off.”

“Do you know the reason why so many people get killed by guns in America? Because idiots like you – and I use that word very deliberately – think it’s funny to laugh in the middle of me reading out a statement from the victim’s family at Sandy Hook,” Morgan chided.

“All your emotional rhetoric doesn’t solve any problems,” Gottlieb countered. “It’s people like you that’s politicized it. Not me.”

The CNN host closed out the segment by insisting that Gottlieb laughing at a quote by a Sandy Hook survivor was among the more “disgusting things” he has ever witnessed before cutting his guest off.