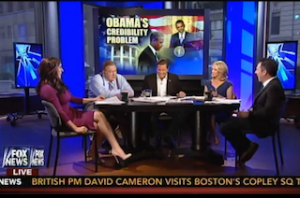 On a day of difficult news for the Obama administration, Fox News’ The Five began their afternoon program by turning President Obama‘s recent commencement address plea for students to “reject” the cynical voices that say government is a “sham” back around on him. “About those voices,” Greg Gutfeld said, “first they said Benghazi, then they said the IRS, and now the say the DOJ.”

“What happened to ‘No Drama Obama?'” Andrea Tantaros asked. “This is a president that hasn’t been held accountable until now, so I think he’s getting very angry and very defensive.”

Bob Beckel pushed back on the accusations that there was any wrongdoing in the case of the Justice Department’s seizure of Associated Press phone records. “Under the thing you all love so much,” Beckel said to his more conservative co-hosts, “the Patriot Act, they are allowed to do these things, if they’ve exhausted every possibility. So whether we like it or not, that is the law. They can do that. They ought to change the law, frankly.”

“There are two players common to all three scandals,” Dana Perino said. “Obama, himself or the White House, and the press. “The press ignores claims from the Tea Party for three years that they were being targeted by the IRS. The press gave Obama a pass on Benghazi for seven months.” She said the only reason the press are “outraged” by the AP scandal is “because they were targeted.”