‘What’s Your Beef?’ O’Reilly Confronts Trump for Sniping at The Factor
video

‘What’s Your Beef?’ O’Reilly Confronts Trump for Sniping at The Factor 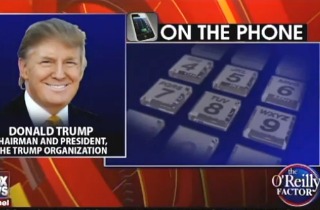 Get ready, because the segment below might contain the biggest bit of cable news ego-tripping you’ll ever see.

For background, Bill O’Reilly teased a 2016 segment earlier this week by saying Donald Trump and Sarah Palin running for president might make 2016 a reality show. Palin scolded him over it, O’Reilly told her to not be so worked up about it, and Trump took a swipe on Twitter at O’Reilly’s “deceptive journalism” and downward spiral of The Factor.

And tonight, O’Reilly invited Trump on The Factor to address The Donald’s wounded ego. “Why make it about his ego?”, you might ask. Well, only because Trump complained to O’Reilly that his name was used by O’Reilly in a Fox promo and then he only got a brief mention by O’Reilly instead of a good chunk of the segment being about him.

Oh, and he brought up how well The Apprentice is doing in the ratings.

O’Reilly started out by asking, “What’s your beef?”

And he had, not surprisingly, some critical things to say of Trump. First, he reiterated the criticism that it’s a big challenge for him to put together the kind of national organization the other 2016 candidates have. Second, he practically rolled his eyes when Trump brought the conversation around to The Apprentice‘s ratings. And third, and most importantly, O’Reilly flat-out told Trump he doesn’t think he’s really going to run for president.

O’Reilly concluded by advising Trump to just “watch the tweets” in the future.