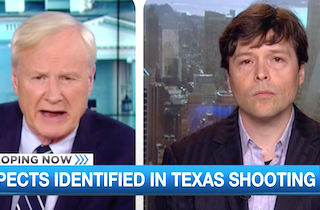 There’s been a lot of debate today about the actions and intentions of the American Freedom Defense Initiative, the group led by Pamela Geller that held a “Draw Mohammed” cartoon contest in Texas yesterday where two shooters showed up. They were killed, and Geller has been pushing back against any suggestion that the provocative nature of her group brought about those attacks.

Chris Matthews tackled that argument on his MSNBC show tonight, bringing up what Geller’s group did and asking, “Does that in some way cause these events––well, not the word ‘causing’––how about provoking, how about taunting, how about daring? How do you see the causality factor here?”

MSNBC terrorism analyst Evan Kohlmann expressed that Geller’s group is not standing by the principle of free speech, but of “hatred for other people.” He said, “When you provoke people and incite people, that doesn’t make violent actions right, but don’t be surprised that it happens.”

He even told Matthews this kind of provocation is “putting American servicemen abroad at risk,” and the kind of “disparaging” stuff Geller’s group engages in is “exactly what leads to terrorist recruitment.”

Matthews closed with this observation:

“I remember the old days when the Communist Party and the Nazi Party would sort of team up in a sick, sort-of-symbiotic way. One would have an event, the other would attack it, you know? I think [Geller] caused this trouble, and whether this trouble came yesterday or it came two weeks from now, it’s gonna be in the air as long as you taunt.”