Why Is Alec Baldwin’s Anti-Gay Problem Being Tied To Paula Deen?

Why Is Alec Baldwin’s Anti-Gay Problem Being Tied To Paula Deen? 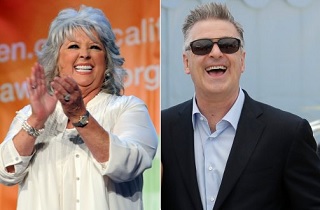 There are few things I hate more than arguments about “double standards,” and their cousins, “false equivalencies,” because I find that they’re usually deployed as a way to avoid taking responsibility for something your “side” of a particular issue does. Recently, actor Alec Baldwin‘s gay slur-filled Twitter rant against a British reporter has been linked to Paula Deen‘s trouble with the n-word, with folks asking why Baldwin gets a pass, but Deen gets drummed out of her corner of show business.

There are instructive similarities, but why do these incidents have to be tied together like this? Both Deen and Baldwin have offended minority groups by using slurs, and they’ve both apologized with varying degrees of cluelessness. Deen has been taken out and metaphorically shot by the media, while Baldwin appears to be getting off with a tug on the wrist. That contradiction isn’t just being noted on Fox News, but by liberals like Bill Press and Stephanie Miller, and on CNN and HLN panels over the weekend (according to TV Eyes, on MSNBC, Baldwin’s rant merited only a single mention, on Friday’s Morning Joe).

I think it’s fine to discuss the similarities in the stories, but the way they’re compared shows the problem with this kind of transactional logic. Almost all of these segments reduce Paula Deen’s actions to her long-ago use of the n-word, and some have even outright minimized the transgression. The public’s problem with Paula Deen is much deeper than that, and she couldn’t have handled her multiple apologies worse if her hands were made of deep-fried ham. She even suggested that the whole thing could be cleared up if black people would just watch their language in the kitchen. It shouldn’t be necessary to minimize her conduct in order to condemn Baldwin’s.

On the other hand, Alec Baldwin’s transgression has been dealt with in an arguably more insulting way. If you missed it, Baldwin went on a Twitter rant against British reporter George Stark  (whose provocation is, in my view, irrelevant), in which he tweeted the following:

Columnist Andrew Sullivan rightly denounced Baldwin, and only slightly oversold the rant when he called it an incitement to gay-bashing. Technically, Baldwin was only threatening to harm Stark himself, and although his insults were anti-gay, the impetus for the violence was clearly not the man’s sexual orientation. That small distinction, however, gave Baldwin what he thought was an opening to dismiss the whole thing by apologizing, not to Stark, but to GLAAD (emphasis mine):

“My ill-advised attack on George Stark of the Daily Mail had absolutely nothing to do with issues of anyone’s sexual orientation.  My anger was directed at Mr. Stark for blatantly lying and disseminating libelous information about my wife and her conduct at our friend’s funeral service.  As someone who fights against homophobia, I apologize.

I have worked, periodically, with numerous marriage equality organizations, especially over the past couple of years, to achieve the very rights that gay couples are earning by recent court decisions. I would not advocate violence against someone for being gay and I hope that my friends at GLAAD and the gay community understand that my attack on Mr. Stark in no way was the result of homophobia.

Many Thanks, Alec Baldwin.”

GLAAD magnanimously accepted Baldwin’s apology for the rest of us, without either of them noting the fact that Alec Baldwin’s slurs were, themselves, violence against a person for being gay. As GLAAD must surely know, and Baldwin must surely be taught, language like his kills. Shame on GLAAD, and on everyone else who is giving Baldwin a pass, for failing to do so.