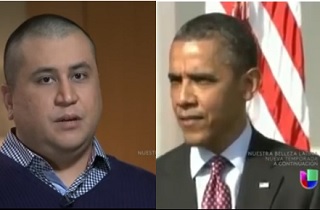 Unemployed, “homeless” artist George Zimmerman has roared back into the news on the strength of a pair of interviews timed with the trial of Michael Dunn for the murder of Jordan Davis. In both interviews, Zimmerman expressed disappointment with President Obama, telling CNN that he felt like a “scapegoat,” but going much further with Here and Now‘s Ilia Calderon, telling her that when President Obama spoke about the killing of Trayvon Martin, he did it simply to gain votes.

The week that Trayvon Martin’s killing became a huge national news story, President Obama spoke about the tragedy from the Rose Garden of the White House, expressing empathy for the slain teenager’s parents with the now-famous observation that “if I had a son, he’d look like Trayvon.”

According to the translation provided by Univision, Calderon asked Zimmerman how he felt about the President’s remarks, and Zimmerman said he was “Upset, sad, disappointed.”

“I was a huge supporter of President Obama,” he continued, “and all my friends, my family knew it, they knew it, and when everything first came out and people started to send petitions to the White House, the spokesman, Jay Carney, said that this is a state case, we aren’t going to do, the United States and the federal government have no business commenting about this, about this investigation. And then suddenly the President, with the election almost here, decided to make a comment that seemed to me, that seemed unfair to me, especially, after saying that they weren’t going to comment.”

“You mention the election,” Calderon noted. “You think that President Obama mentioned this case because he wanted to gain more supporters, he wanted to win more votes?”

“That’s it, absolutely,” Zimmerman replied, adding “He saw it as an opportunity.”

Here’s that portion of the interview, via Univision (full interview English transcript here):